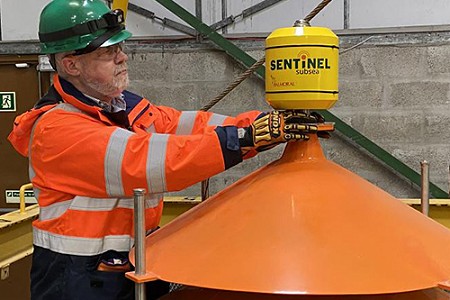 Fossil fuels are the backbone of many global economies and, at time of writing, supply 80% of the world’s energy. However, extensive carbon dioxide (CO2) emissions released by burning fossil fuels are widely believed to be the main cause of global warming.

In order to combat the consequences of fossil fuel usage, scientists and governments are working to identify alternative technologies that will generate enough energy to meet the increasing demand while reducing the emissions of greenhouse gases to the atmosphere. In other words, across the globe, we are engaged in the implementation of an “energy transition”.

One of the technologies most widely thought to facilitate this transition is carbon capture and storage (CCS); a process of capturing carbon dioxide at the production source and transporting it to an isolated destination, preventing the CO2 from entering the atmosphere.

CCS is critical for the delivery of cost-effective transition to the low carbon economy and is believed to be one of the few technologies that will help governments across the globe meet their decarbonisation targets. The process can capture up to 90% of CO2, allowing us to continue using available fossil fuels by decarbonising heavy industries and power generation.

Wells in a CCS Landscape

The CCS process consists of three components: trapping the carbon dioxide at emissions’ source, transporting it to a storage location and finally securely isolating it in rock formations offshore.

Wells have the potential to play a key role in capturing and storing carbon in depleted oil and gas fields, acting as transportation routes and allowing the injected carbon dioxide to be moved into the deep sandstone reservoir within a sufficient timeframe.

As a general guideline, the existing well infrastructure may struggle to perform its role as viable long-term CO2transportation route, as the majority of wells have been located and designed with a single purpose of oil and gas production in mind. With over 5,000 wells forecast to become plugged and abandoned in the North Sea in the near future, the long-term sustainability of suspended or abandoned well is vital not only to the late life and decommissioning process, but also has an impact upon their value within the CCS process. Using wells for CO2 injections projects requires high levels of abandonment standards which will secure wells’ integrity in the future and assure that subsurface fluid cannot migrate upwards.

Sentinel Subsea was created to address the rising concern that as the world transitions into greener energy and the North Sea enters a period of intense activity around decommissioning of oil and gas wells, there is a growing awareness that unplanned hydrocarbon emissions from shut-in, suspended or abandoned wells could be an increasingly serious issue both from environmental and cost perspective.

The Aberdeen-based company’s innovative technology is set to have a significant impact upon the way in which well integrity monitoring is conducted, holding the key to de-risking and preparing wells for a low carbon future.

Central to its technology is Sentinel Well Integrity Fluid Tracer (SWIFT), which together with Sentinel Subsea’s well integrity monitoring system, currently finds its application across the lifecycle of any subsea well, where early detection and remediation of a loss of zonal isolation is critical. That requirement could now also apply to CCS.

Recent studies estimate that the UK has 78 GT (78 million tonnes) of potential carbon capture storage. As only 15% of this would last the UK for 100 years, it’s a hugely viable option. In order to unlock this storage capacity there must be complete confidence that interconnected suspended or abandoned wells will retain their integrity as the reservoir is re-pressurised.

Retrospective intervention or periodic manual inspections to verify well’s integrity are both costly and emission generating. Sentinel Subsea’s system not only has the potential to significantly reduce the consequences of undetected losses of zonal isolation, but its revolutionary well integrity monitoring system reduces both operational time and costs, protects the environment and gives operators a peace of mind.

The alternative monitoring solutions currently available on the market, such as optical or acoustic, show limitations in terms of complexity of deployment, longevity, frequent and costly maintenance, as well as their ability to identify which specific well may have an issue.

At the present time, there are varying levels of legislation in place to track shut-in, suspended or abandoned wells, meaning a loss of zonal isolation could potentially go undetected for a significant period of time. Sentinel Subsea’s technology provides a safer well integrity solution which minimises the possibility – and as a result the ramifications – of such incidents.

By passively monitoring the environment, Sentinel’s in-situ technology comprises SWIFT – the unique, environmentally sound chemical – a beacon and trigger. SWIFT is sealed below the barrier within a well while an alert beacon, sensitive to fluid tracer, is placed proximate to the well and held in place by its own trigger. Should the well’s integrity be compromised, SWIFT will emanate out, dissolving the beacon trigger which will be released to surface, where it is activated, producing a signal which alerts Sentinel to the beacon’s location.

In addition to lowering the ongoing monitoring costs as compared to current methods and mitigating remediation costs by providing an early alert system, adoption of Sentinel Subsea’s system is a very real signal to the wider stakeholder community that environmental stewardship is a vital part of North Sea oil and gas operators’ ethos.

The future of CCS Energy transition is an ongoing and inevitable process which is needed in order to balance an increasing demand for energy with the goal of reducing the emissions and limiting global warming to 1.5° C above pre-industrial levels. It is at forefront of development strategies and despite progress in exploring renewable energy sources, CCS is seen as an alternative that would allow significant reduction of CO2 emissions as the global energy needs are expected to grow.

In March 2020, the UK government pledged GBP 800 million for developments of CCS in the UK; however, it is believed that more has to be done in order to meet legislative goals of net zero by 2050 in the UK and 2045 in Scotland.

It’s essential that oil and gas sector, as a major contributor to CO2 emissions, can adapt to the changes and is able to utilise its skills, expertise and infrastructure to contribute to decarbonisation of the industry.

Entire fields and interconnected wells can be designated as future storage potential and, if selected, simple deployment of Sentinel Subsea’s long-term monitoring system will provide a continuous reassurance that harmful emissions remain locked away.